More caps to roll out, it seems to me like I really need to remember these things. I had a couple of friends with birthdays so I made a few caps for those, and I also have requests I've been filling out and sending off so lets get this road on the show shall we? 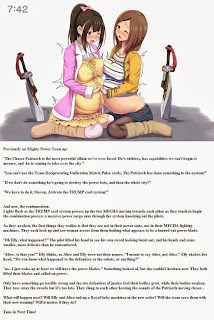 This was for my friend Elly's birthday. I love her to death, and she loves baby bumps. Then again, I've gotten to like them myself. Of course in my case it's probably about the desire to have one for myself, and the fairly crushing disappointment of more than likely never getting one. Still it is an odd world where I dream fondly of morning sickness. 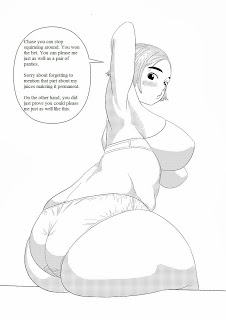 The first of four captions I made Chase for his birthday. Sorry Elly, I had more time leading up to Chases. Anyway, not much to say here other than the world bubble was easy to clean from the Manga image so poof, one cap down and I get to pad out my count.

This one was a dud, and was me pushing the gross factor quite a bit. Chase didn't much like it, and I'm including it here because I own my errors. And who knows, maybe someone out in internet land really wants it? 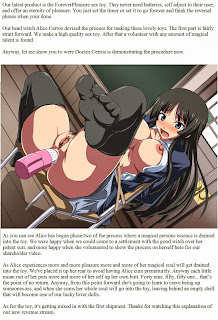 This one was created after the next one, on a dare from a friend of mine named Nikki, whom I have come to love to pieces but is not an exceptionally sexual person so it's unlikely you'll see much. Then again she knows how to push my buttons so sometimes I'm pondering a birthday cap, and she'll go, "great, now make yourself the sex toy." so thus did this become cap three, since I had already made cap four. 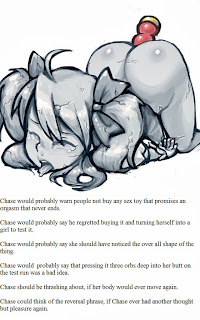 Lastly we have number four for Chases birthday, also a quick one based on this lovely manipulation that a random 4chan thread gave me. Petrifaction isn't something I do often, but it is something I enjoy. Oddly enough it's considered one of the less extreme objectificion fetishes so go me for also liking something slightly closer to normal?

The next few are requests or exchanges so my expert camera work is being denied.. 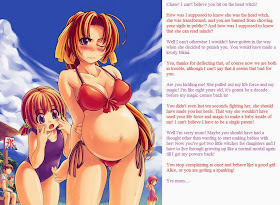 A request for Chase again, Baby bellys for EVERYONE!  Also AR for me. More fun dreams I've had is waking up as a ten year old girl and getting a shot to go through most of my life as a girl this time. Nothing sexy about it, just who wouldn't want a shot have childhood again.. only better!

Another request, this one being  from Chase, and this tie he just said, "Do something with this. I can't think of a story." So it sat for while before I was thinking of an RP we did and poof here comes a caption kicking up.

More to come when I"m not passing out tired and unable to type a sentence in just one try.
Alice at 1:46 AM
Share